It will certainly be a step up in level of competition for AFC Show when they travel to Finland to face a team currently challenging for the European championship, but this will be a great chance for the Stavanger side to be tested against quality opposition before the Norwegian 2013 season starts against Norwegian champions and another team ranked as one of Europe's best; the Oslo Vikings.

With new Head Coach and Quarterback Reed Gottula at the helm, AFC Show is ready to take the next step in 2013, and signing a two-year home-and-away preseason games deal with the Helsinki Wolverines is part of that.​​ Show's Athletic Director Jarle Vangsnes hopes facing such a quality team before the season will help AFC Show be well-prepared when the Norwegian 1st Division kicks off, something that was an issue in 2012 when Show was set to face a top level Danish team that pulled out of the deal only days before the game - leaving Show without any preseason action at all.

The Helsinki Wolverines are known for playing tough and high quality football, and has excellent import players QB Cedric Johnson and RB Stephen Stokes return from the 2011 and 2012 seasons. Other stars include WR Tommi Pinta and LB Kalle da Silva who came over from the Seinajöki Crocodiles and Lappenranta Rajaritarit respectively after the 2011 season, outstanding LB Efe Evwaraye (formerly of the Kiel Baltic Hurricanes), DB/KR/PR Jeremy Henderson, OL Karri Kuutila (once signed by the St.Louis Rams), and British DB Ric Hennessy, who also happens to be a well-known blogger in the European football community.

A familiar face will also be on the other side of the ball when AFC Show is on the field, as 2012 import player Robert Schaper-Kotter will be playing for the Helsinki Wolverines in 2013.​​ Schaper-Kotter was a LB/RB and Long-snapper for AFC Show during our first season in the top division of Norway.

​​​​​​​​​​​​​​​​
​
AFC Show will travel to Helsinki with the majority of our 2013 squad, including returning DL/LB/TE Darryl Kennon (former DIII All-American from Wabash College), LB/RB Jorma Bailey (University of Tulsa), RB Simon Bruset (AFC Show 2010 MVP) and many others from the 2012 squad. A bunch of newcomers to the team will also be part of the trip. AFC Show looks forward to facing the best Finland has to offer, and also looks forward to hosting the Wolverines in Stavanger in 2014!

AFC Show will travel to Finland for a preseason game in 2013!

The opponent on the other side of the field will be none other than 2011 Finnish champs and 2012 Finnish vice-champs, the Helsinki Wolverines. The Wolverines also compete in the Eurobowl, the highest level of competition for club teams in Europe.​​

The game will take place in Helsinki on March 23rd, and will be an outstanding occasion for AFC Show to face some of the best Europe has to offer.​​

The game will also mark the return of HC/QB Reed Gottula to Finland, where he played for the Sipoo Bulldogs in 2012. The game is the first in what AFC Show hopes will be a series of international preseason games in the upcoming years, and includes the Wolverines travelling to Stavanger in 2014.
Helsinki Wolverines in blue and yellow; here from a game against European champions Calanda Broncos in 2012 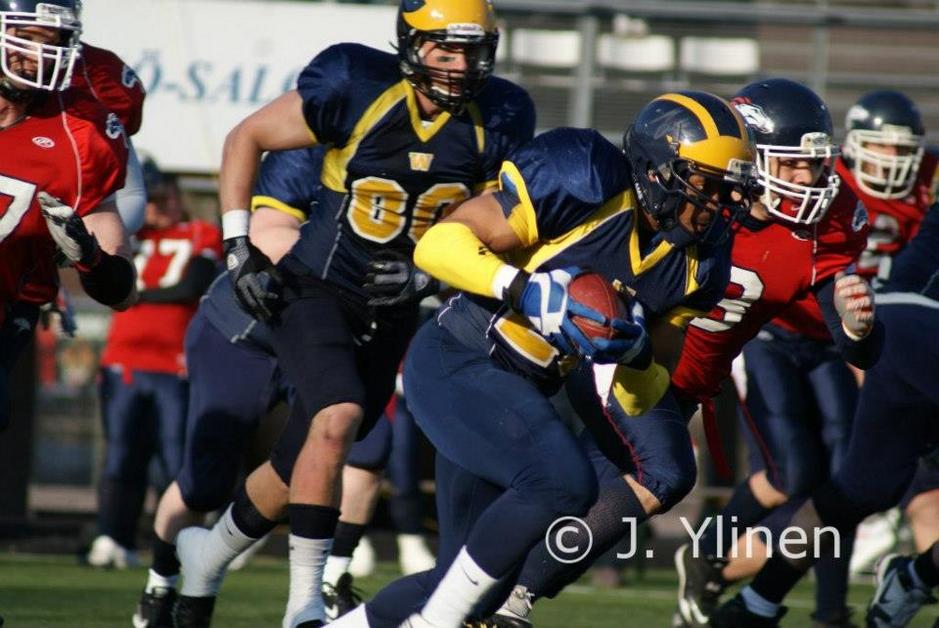