20130521: Gould from purple to pink!
Sign-Up  |  Log-In
​​AFC Show actually scouted Dom last year due to the fact that he was going to join one of our opponents then. Unfortunately for him and that team, he broke his arm and was unable to play for them. He was one of the few opposing imports that really impressed us when we did research in preparation for the 2012 season, and AFC Show is looking forward to having him join us for our 2013 campaign!

Says Head Coach Reed Gottula:
- We are excited to have Dominic in our club. He comes from great programs and has had a lot of success in his career.​​​ He will add depth to multiple positions both offensively and defensively.
It's great to have a player like Dominic who is always around the ball and able to make plays. We expect him to make an impact immediately on both sides of the ball.​

Gould has been playing football for approximately 10 years, earning numerous awards along the way, including defensive MVP and team captain for several of the teams he has represented during his football career. He was both a team captain and a very dominant Linebacker for Hertfordshire Hurricanes this past season, creating havoc for opponents with his aggressive play and quickness which is rarely seen in Europe. The Hurricanes ended as runners-up to Tom Levick's Birmingham Lions. Among other things, Dominic Gould was chosen to the Double Coverage website All-Star team as the top linebacker in British college football.

​​In 2012 his university team won the championship, and Dominic played an important part of that with his many tackles as he led the Herts defense. That included playing the championship game with a broken arm! Gould was voted team MVP in both 2011 and 2012.

Dominic Gould is the third and final Brit to join AFC Show this year (the others being the mentioned Thomas Levick, and Kyle Burrows). He will join Show in mid-May, and his first game will be against Bergen Storm in Stavanger on May 25th.

Gould was, like Thomas Levick, a team captain and starter for the Great Britain national college team that beat Sweden earlier this year. Dominic, or Dom for short, started at Linebacker - just like he has been doing for his college, the Hertfordshire Hurricanes. He led the Hurricanes to the British college championship in 2012, and finished runners-up in 2013.

Dominic Gould will be joining AFC Show in a few days and most likely play his first game on the 25th of May when we face Bergen Storm.​
​
Dominic Gould.
​Photograph by Garry Neesam. 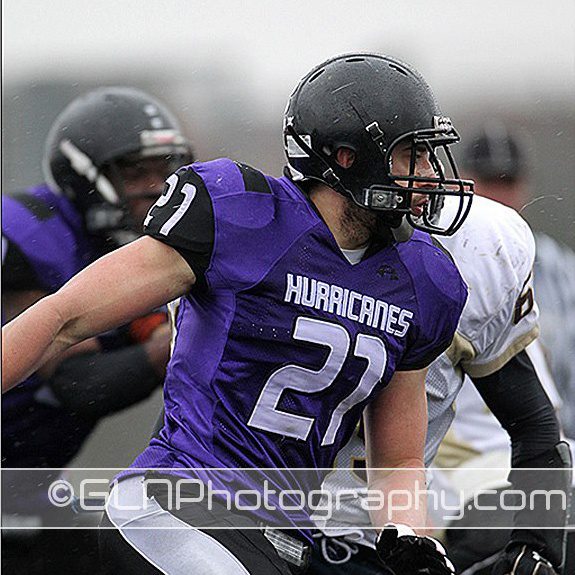