AFC Show received the ball to start the game, but the Show offense was stopped without gaining a 1st down. The Vikings, led by QB Sean Hakes, moved the ball better. However, they got shut down on a 4th down attempt in the redzone, as LB Darryl Kennon tackled Vikings RB Vegard Tysse for a loss of yards. Show had the ball again, but couldn't do anything with it, going 3 and out. The punt by Kåre Vedvik was however blocked in the endzone, and Vikings LB Jesse Alderfer landed on it for a touchdown and 6-0 lead for the Oslo side.

​​The next drive saw AFC Show and QB Reed Gottula finally moving the ball, as the offense put together a better drive, with Gottula finding Kennon and Benedict Gärtner for completions as well as running for a 1st down. However, a 4th and 7 around midfield ended with a dropped pass despite Gottula hitting his target, and the Vikings once again had the ball. The Show defense was able to force another turnover in the redzone, and the Show offense was back on the field. Through the fine running and catching by RB Jorma Bailey, AFC Show was able to gain a 1st down before the drive stalled. The punt was subsequently returned for a lot of yardage by Oslo Vikings PR/WR/DB Eric Ford, and the home team had good field position for the start of their next drive. Unfortunately for the home crowd, the Vikings were unable to move the ball on the drive, and the 4th down pass attempt fell incomplete as Hakes and his receiver were unable to connect.

Show answered with another excellent run by Jorma Bailey, but that was it for the following drive, and another punt was sent booming by Kåre Vedvik after the 3rd down pass from Gottula to Benedict Gärtner fell incomplete in the endzone.​​

The punt put the Vikings around their own 10 yardline, where Darryl Kennon blew up the first play for a loss of yards. A penalty followed, before the Vikings fumbled dangerously near their own endzone. AFC Show's LB Jorma Bailey picked up the ball and returned it to within two yards of the endzone. AFC Show was now in outstanding position to score, but Reed Gottula could not connect quickly enough with an uncovered WR Simon Bruset on the next play, and the late pass was not caught by Bruset.​​

​​The chance to tie the game was thus missed, as AFC fumbled on the very next play, handing the ball back to the Oslo Vikings on their own goalline. After several futile attempts, Hakes found Eric Ford for a long gain, and with seconds to spare the Vikings had time for a last play before halftime. However, the long pass down the middle of the field was incomplete, and the two teams left the field for the halftime break.
​

The 2nd half started in the worst way possible for AFC Show, as the kickoff return was caught by Eric Ford who promptly outraced everyone and found the endzone for a touchdown.​​ Vegard Tysse booted the extra point kick through the uprights, and suddenly the Vikings had a 13-0 lead.

AFC Show's offense decided to finally step up to the plate, and on the very next drive they presented themselves in excellent fashion, as​​ Gottula found WR/RB Simon Bruset, WR Benedict Gärtner, TE Darryl Kennon, RB Jorma Bailey, RB Christian Andreassen and finally Kennon again for 6 completions on 6 passes on a touchdown scoring drive. The drive also saw a short run by Bailey. The TD pass happened when Gottula pump-faked, finding Darryl Kennon alone behind the entire defense where he could run the last few steps into the endzone to put AFC Show on the scoreboard, 13-6.

The next drive saw Vikings RB Lorenzo Proctor slash through the Show defense​​, but as the home team entered the redzone another fumble occurred, leaving the ball in the hands of Reed Gottula and the AFC Show offense. Good runs by Gottula and Jorma Bailey gave the visitors a 1st down, but that's also where it ended, and Show punted the ball back to the Vikings. RBs Vegard Tysse and Lorenzo Proctor had several good runs, before Hakes went to the air, finding Eric Ford in the endzone for a TD pass. The PAT was good, and the Vikings now had a 20-6 lead.

AFC Show was back on offense, and back in let's-move-the-ball-mode. Gottula found Darryl Kennon on a pass.​​ Gottula then scramble for what looked to be positive yards, but LB Nicolay Falch Knutsen of the Vikings made a great play to rip the ball out of Gottula's hands, and the Vikings had the ball back. Darryl Kennon, this time at LB, decided to repay the favor, and on the very next play RB Lorenzo Proctor got stripped of the ball and AFC Show recovered: The offense was back on the field.

AFC Show now had excellent field-position around the Vikings' 40th yardline. Gottula found​​ Simon Bruset for a nice gain on the last play of the 3rd quarter, and the team in pink jerseys were moving the ball at the beginning of the 4th (and last) quarter of play. A pass to Darryl Kennon saw the Show offense right outside the Vikings' redzone, but the drive stalled and the Oslo team got the ball back. An unsuccessful drive later, AFC Show got the ball back and moved the ball with great catches by Kennon, Gärtner and WR Pål Dannevig, before RB Simon Bruset caught a screen pass for a short gain and then RB Jorma Bailey got the ball in the backfield, racing 23 yards for the touchdown on a run to the outside. The PAT was no good, and Show was trailing 20-12 with only a few minutes left on the clock.

The Oslo Vikings figured out that scoring at this point would be a nice way to finish the day and win the game, and RB Lorenzo Proctor took that to heart, scoring on a great effort to put the score at 26-12.​​ Vikings DB Bror Jahre then sealed the deal, intercepting a Gottula pass. The Vikings could take a knee and run out the clock, winning the game.

All in all it was​​ a disappointment for the Show to lose in the season opener. It was however good to see both the defense and offense step up at times with great play, and with some tweaking in the upcoming weeks you can count on AFC Show to be in the hunt for a Norwegian Championship!
​
AFC Show's next game is another away game, this time versus the Kristiansand Gladiators on the 27th of April.
AFC Show travelled to Frogner stadium in Oslo to take on the reigning champions, the Oslo Vikings, for the season kickoff in the Norwegian 1st Division 2013. In a relatively close game, the home team came out on top when all was said, blocked, tackled and done.
A slim 6-0 halftime lead by the Vikings gave the Stavanger side hopes of turning the game around, but it was never to be as Show trailed the entire game, despite reducing to 13-6 and 20-12 in the 2nd half.

If you're looking for film from the game, send us an e-mail and we'll send you an invite to AFC Show Inside pass - which gives you access to film from all our games in 2013 AND previous years! 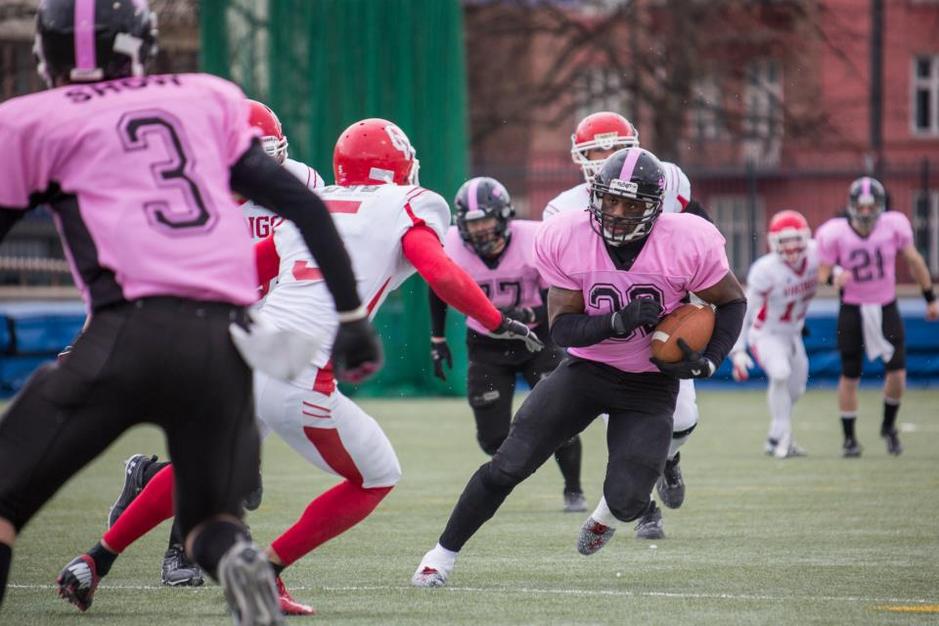 Jorma Bailey on a carry Saturday. Photo by Max Emanuelson. 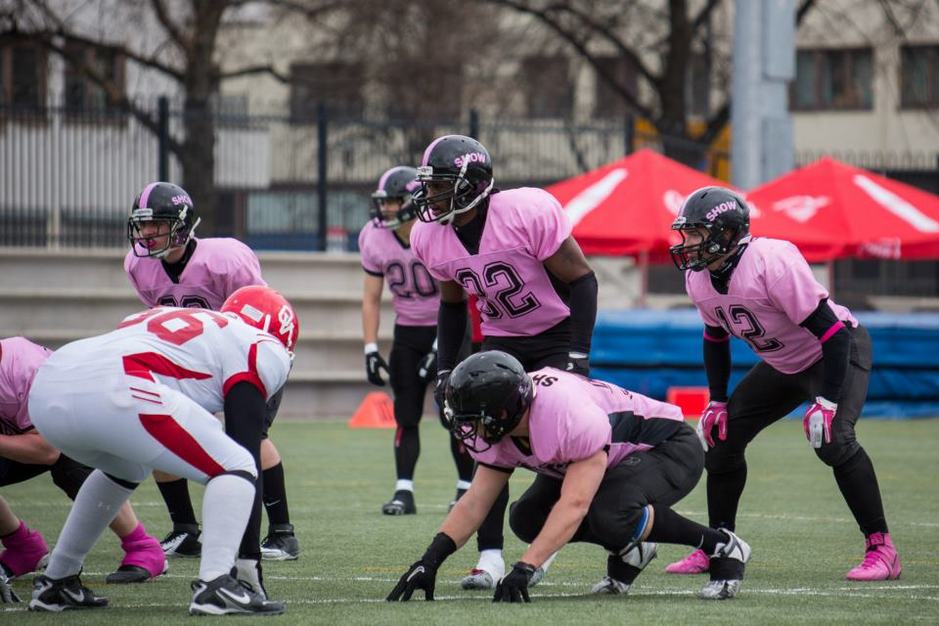